Asparagus makes a tasty side dish, and it's easy to prepare. With some simple equipment, there are multiple ways to cook asparagus on the stove.

To steam asparagus, you need a steamer basket and a saucepan with a lid. Steaming will preserve the nutrients in the asparagus and yield a tender, but not soggy, spear. To steam:

Blanching is a good way to cook asparagus for cold foods, such as in a salad or on a veggie tray. With blanching, the asparagus will retain its bright green color and be mostly crisp as if it was raw, blanching it also tenderizes. To blanch, you will need a large pot of water, a large bowl of ice water, and a colander.

You can boil asparagus. The result is a softer vegetable, and some of the nutrients will be lost in the water. However, for some people, this is the preferred method. The salt in the water seasons the asparagus as it boils. You will need a large pot, some salt, and a colander.

Pan-frying asparagus yields crisp/tender results. It's also a great way to incorporate asparagus into other foods, such as risotto, pasta, or stir-fries. To pan-fry, you will need a large skillet, tongs, oil, and seasonings of your choice, such as salt, pepper, and garlic. 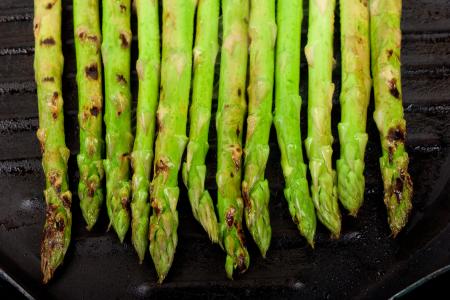 You can also cook asparagus on your stove in a soup. Try some delicious options like a cream of asparagus soup, asparagus soup with lemon and parmesan, or asparagus ends soup.

When cooking with asparagus, you want to use the tender part of the vegetable for best results. Therefore, it's always best to trim away the fibrous ends before using it. You can do this by cutting off the thick, woody ends with a sharp knife, or you can allow the asparagus to show you where it needs to be trimmed by holding the asparagus between the thumb and forefinger of both hands about a quarter of the way from each end of the spear and gently bending it until it snaps. Discard the fibrous ends or save them for another use.

Quick on the Stove

It's easy to cook asparagus on the stove top, and all cooking methods are relatively quick. This makes it a great vegetable to serve as a side dish with any meal.

1
Comments
© 2006-2021 LoveToKnow, Corp., except where otherwise noted. All Rights Reserved.
Resources, Advice & Tips for Covid-19
Read More
How to Cook Asparagus on the Stove