If you are planning to make tempura shrimp, you will need a good tempura batter recipe. The difference between light and flaky tempura and mediocre tempura is all in the way the batter is prepared.

Tempura is a popular dish in Japan. Shrimp and many kinds of vegetables are deep-fried in vegetable oil and served with a soy sauce-based dipping sauce, grated daikon (radish), and hot, steamed rice. Tendon, another popular dish, also has tempura in it. Shrimp or prawns are coated with the batter, deep fried, and served on top of a bowl of hot rice. Tendon is available in local Japanese restaurants, and eaten with a side dish of pickles. Tempura is also served on top of a bowl of soba (hot buckwheat noodles in a broth).

Despite being a popular Japanese dish, the origin of tempura is not fully Asian. Tempura comes from the Portuguese verb temperar which means to season. The Portuguese have a seasoned fish dish that the Japanese borrowed from visiting Portuguese missionaries in the 16th century. After this, the Japanese came up with their own version of tempura. The dish became well-known throughout Japan in the 17th century.

By following the recipe carefully, you will be able to create a batter that will be delicious. Two important tips should be kept in mind:

Once the batter is ready, dip your sliced vegetables into it, coat each one, and fry them until crisp in a pan of hot oil. Placing cold batter into hot oil is what makes for fluffy and tasty tempura.

When serving tempura, you want it to be hot. Usually the fried pieces are served on white, lacy doilies or white parchment. Presentation is important, especially at Japanese restaurants. 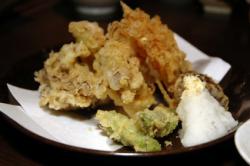 The best batter is crispy and light.

Don't have all the ingredients for the Japanese recipe on hand? You can still make a simple and satisfying tempura, substituting the following batter recipe.

Alternatives to the Tempura Batter Recipe

Some feel that the easiest way to make tempura is to use a packaged mix, which can be purchased at Asian food stores. Some chain grocery stores with Asian food sections will also have a few selections of batter mix. McCormick, a company known for spices and seasonings, now has a tempura batter mix as well.

The most popular vegetables to coat with the batter and fry include:

If you want something out of the ordinary, dip slices of banana into the batter and fry in oil. Be sure to drain the fried pieces on paper towels so the grease is absorbed.You can experiment with other ingredients to fry in the batter. Make sure that the ingredient does not add any of its own liquid into the oil during frying. This will dilute the oil, making it unfavorable for frying the best tempura.

On Krusteaz's website, they suggest substituting flat beer for the water in the recipe to make beer batter tempura. The vegetables are then dipped into this batter and fried.