It's easy to make a variety of moist and flavorful stuffings on the stovetop. Regardless of your culinary tastes or your dietary needs, there's a stovetop stuffing to suit your tastes and needs.

Sure you can buy stovetop stuffing in a box, but it will never be as good as when you make it homemade with your own herbs, spices, and flavorings. This traditional version is tasty and reasonably easy to make. This makes four to six servings. 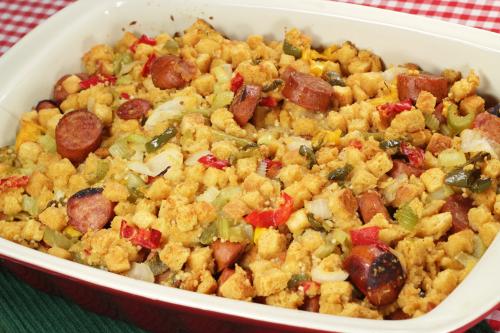 If you have a favorite keto bread, then you can replace the bread in this recipe with a commercial keto bread or make your own. You'll also need 1 pound of sage breakfast sausage.

It's easy to make the stuffing gluten-free by using your favorite gluten-free sandwich bread. All other steps and ingredients are the same.

If you're allergic or intolerant to dairy, then you can replace the butter with a dairy-free butter alternative, such as a vegan butter like Earth Balance vegan butter. Other than this simple substitution, follow the recipe above as written.

It's easy to adjust this stuffing to make it vegan, as well.

Stuffing on the Stovetop for Everyone!

There are so many ways you can adjust a basic stovetop stuffing recipe that it's easy to make one that suits your family's tastes and dietary needs. There's no need to sacrifice flavor when you don't have time to cooking stuffing in the oven. These easy recipes allow you to make delicious stuffing you'll be proud to serve.