Farro is a whole wheat grain valued for its slightly nutty flavor and chewy texture. Cooking it is fairly simple, but you need to know which type you have before you begin. Once you learn a few basic methods for preparing this healthy grain, you can try a couple of recipes and get a better idea of how versatile it can be.

First, check the box to see whether your farro is whole, semi-pearled, or pearled. You have a few options to choose from, and the type you have affects the cooking time.

Cooking this grain on the stove top is perhaps the simplest way to cook it, regardless of which type of farro you plan to use.

Pearled farro usually cooks best using the boiling method so you can keep an eye it and make sure it doesn't overcook. The whole and semi-pearled versions can also be cooked using one of the alternative methods.

This grain is so versatile you can serve it at breakfast or for lunch or dinner.

If desired, add whole or sliced almonds and a dollop of almond butter to the dish. 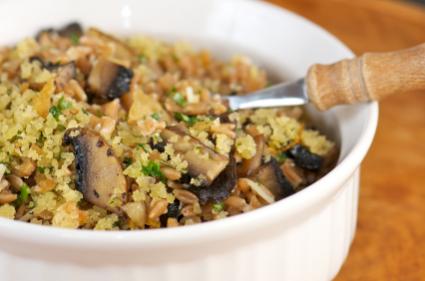 Nutritious, but Not for Everyone

Farro is a delicious, healthy grain, but it's important to know that some people have difficulty digesting it. According to Andrew Weil, M.D., you should avoid this grain if you have gluten intolerance, a wheat allergy or celiac disease. If you're not affected by any of these conditions, cooked farro can be a wonderful addition to your menu.