Pepper recipes are as abundant as there are types of peppers: green, red, yellow, orange, purple, brown and even white. What many chefs don't realize, however, is that they are all the same fruit - a variation of capsicum plant. From salsas to salads to soups to stews, peppers recipes are tasty and healthy additions to many recipes and side dishes.

The different shades of bell pepper color indicate the ripeness of the fruit and its harvesting conditions. Green peppers are the least ripe, and they have a more bitter taste than their colorful cousins. Many people avoid peppers, mistakenly believing all bell peppers have a hot, bitter taste. In truth, however, the longer the fruit ripens in the sun, the sweeter the taste. Peppers can be used in a wide variety of delicious recipes, including stuffed and stewed entrees or side dishes, and as a colorful accompaniment to other dishes such as salads or stir fry. Peppers are also a healthy addition to most meals since they are high in vitamins C and A.

Use any color of bell pepper for this recipe. Green peppers do stay firmer than red, yellow or orange peppers do, but the sweeter taste of one of the other colors may be more palatable to some people new to eating peppers. Select a pepper that is short but wide to help it balance, while also holding the maximum amount of stuffing. 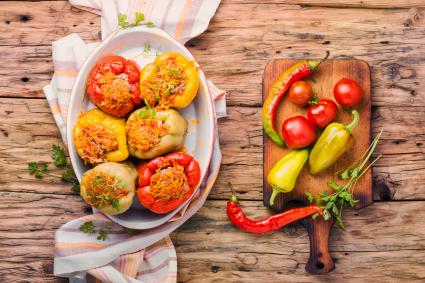 There are nearly as many variations of hot peppers as there are of the sweeter, bell variety. Some are mild, like banana peppers, while others, like the ghost pepper, are extremely hot.

Hot peppers can be added to salsas, sauces, jams and jellies, stews, salads or anything else you want to give a little kick. Hot peppers also combine well with bell peppers in dishes such as chili, where the hot and sweet combine to add depth to the dish.

This pepper recipe uses both spicy jalapeño peppers and mild bell peppers. The final taste is sweet, however, with only a mild spice as a finish on the back of the tongue. 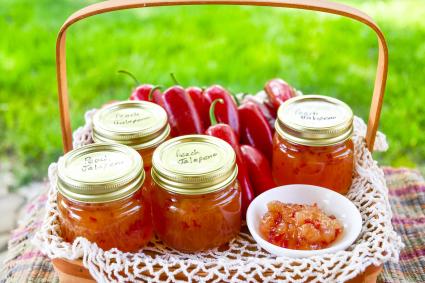 Add Color and Flavor to Your Meals

When cooking peppers, choose the brightest, most colorful fruits for a stunning presentation. Fresh peppers in good condition should have smooth, firm skin without bruising or discoloration. Consider adding diced peppers to bland dishes for a surprising flavor. They also make excellent additions to salsa, steak, shish kebobs, meat loaf and soups. Ground up peppers can be added to many recipes to avoid the criticism of finicky eaters as well. To avoid overcooking the fruit, cut slices thin before grilling or sautéing - longer cooking may dull the color and reduce the visual impact of the fruit.