Although many breakfast connoisseurs may believe that marmalade is a more elite type of jam or jelly, it is actually a completely different type of fruit spread. Marmalade, though sweet, is the only type of fruit conserve that includes bits of the fruit's rind, giving it a greater variety of texture than jam or jelly. Long cooking times are necessary to soften the peel, and marmalades often use a high amount of sugar to balance the bitterness of the rind. 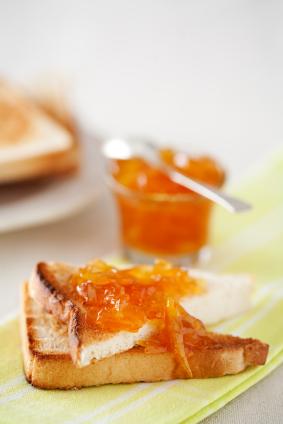 The most common marmalade is made from oranges, though other varieties include grapefruit, lime, lemon or other desirable citrus fruits. Regardless of the fruit choice, careful cooks should follow these general tips to create delicious marmalade:

Many Uses for Marmalade

Marmalade recipes are most often associated with breakfast, but they're also useful for meat glazes, frostings, cakes, and other desserts. Whether you intend to spread your marmalade on toast or use it as part of a more elaborate meal, proper preparation is essential for a delicious result.