In their first novel, The Chef Who Died Sautéing (Hilliard and Harris), co-authors Susan Smily and Honora Finkelstein detail the adventures of psychic detective Ariel Quigley as she uncovers murder and delicious meals in Alexandria, Virginia. The recently released companion A Killer Cookbook #1: Recipes to Accompany The Chef Who Died Sautéing features over 30 recipes from the novel that aspiring chefs can create in their own kitchen.

LoveToKnow Recipes caught up with the writers to learn what makes them, and their recipes, tick.

LoveToKnow (LTK): Tell me about yourselves and your background.

Honora Finkelstein (HF): When I got out of college, I taught for a while and was a journalist, then a TV talk show producer and host. I met Susan at a workshop for the International Women's Writing Guild. I was getting ready to take the TV show on the road.

Susan Smily (SS): I didn't have an extensive background as a writer but I was an elementary school teacher and did various writing for curriculum work and had my own company producing educational curriculum in Canada. I have always loved writing and when Honora began talking about taking her show on the road, I decided it was a good time to leave teaching. I took a play-writing workshop and learned that I could write dialogue and that writing dialogue was fun, which shouldn't have surprised me since I love to talk.

HF: We had an idea to write a series about a psychic detective, and we've both known psychic detectives. We came up with a pair of characters: Ariel is the psychic detective and English professor who talks to ghosts, has precognitive dreams, and reads tarot cards. Bernice Wise is her partner in crime solving and 55-year-old Jungian therapist. The books are set in Alexandria, Virginia, which is a really good place for encountering the other side.

LTK: Let's talk about your book, The Chef Who Died Sauteing. What made you decide to write a mystery that incorporated food into the plot?

SS: I love cooking, planning meals, visualizing things and have always loved the way restaurants are designed and layed out for the ambience. The restaurant that story takes place in is loosely based on a four-star restaurant in Vancouver and the Chinese banquet is set up like Chinese banquets in Hong Kong. I always think about color layout and visualizing and that was part of the book…they don't just go out to dinner. Bernice doesn't just go to the kitchen to make breakfast, she goes to the kitchen to make peach waffles. We hadn't always thought of it as a cooking book, but as we started to read it through we thought it could be a cook book. 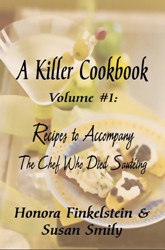 LTK: The companion book, A Killer Cookbook #1, contains over 30 recipes from The Chef. Which one is your favorite?

SS: I like a lot of them, but I really like the beef stew because it's so friendly. It's comfortable food…you can play with stew and don't have to be exact. You can add some of this or throw dumplings on top. The key ingredient is that it's made with Guinness as part of the stock and there is cinnamon and sweet potato. (Check out this Beef Stew Recipe here)

HF: There's a chocolate mousse recipe that Susan allowed me to taste while she was preparing it and did kitchen tests. I'm a chocolate fanatic and addict.

LTK: Are these your own recipes or did you work with a chef?

SS: They came from a variety of places and were culled from cookbooks and magazines and newspapers. Some have come from chefs. My ex-husband was a chef and the restaurant in the novel is based on the restaurant he had. So I spent bunches of time watching him in the kitchen, but I was a cook even before he was. But I learned a lot from helping him prepare dishes when we had guests over or from hanging out in his kitchen.

LTK: Some of the recipes may be a bit intimidating to the average cook. What tips do you have to share with your readers?

SS: What we tried to do in compiling them was to make sure I wasn't doing recipes everyone can find online because there are a million things out there that are available to people. But some of the Chinese recipes are intimidating because they are banquet recipes so how much food do you not include? I have a recipe book my mother gave me, it's the "Worlds Best Recipes" and it says "You probably won't be able to cook most of these meals." We tried to do a blend, but people can buy a raspberry cheesecake and they can look at the cookbook and think about how it could have been made.

HF: We recently got together with my family and most of children are cooks and they were exchanging recipes and saying which recipes to use in the next book. They'll say 'here's a recipe for my chicken cordon bleu' and they are always developing their own recipes so we have a lot of great resources. It's kind of a delicious way to spend our time.

SS: I'm not intimidated by main course recipes, I am much more intimidated by pastry cooking. But there are some people who can sit in the kitchen and whip out cakes and cookies and pies. Different people have different talents in the kitchen and what we've tried to do with the cookbook is for people who have read the novel and want to try a meal, they can do that. And it's the characters themselves talking about the recipes.

HF: The cookbook is dedicated to the 9 chefs so it's a kind of blending of our fictional characters with the blending of the food.

LTK: What else do you have planned for Ariel Quigley? Will we see more recipes in future books?

HF: Our next book is The Lawyer Who Died Trying. We have already outlined what's going to be in it and Indian food figures prominently. There are probably 8-10 events or dinners out and there is an incredible Halloween party. They also order out for Chinese so there is a blending of cultures. That book should be out in April and the cookbook will be with it this time. The Reporter Who Died Probing will be out in January 2008 and there are four seasonal celebrations we are going to include.

To sign up for the Ariel Quigley e-newsletter, which contains more recipes and tips, or to learn more about the authors, visit ArielQuigleyMysteries.com.