Understand the history of baking in America by learning about colonial baking. Without the use of ovens or modern ingredients, baking during colonial times was far different than it is today. Even so, colonial bakers found ingenious ways to use the resources they had to produce tasty baked goods.

While commercial bakeries did exist in the colonies, they were few and far between, particularly during the first few decades of settlement. Therefore, most families baked all of their bread goods themselves. Because baking during colonial times was such a chore, most of the baking was done all at once, once a week. This included the bread the family would eat with each meal and any desserts such as pastries, cookies, or pies that might be consumed during the coming week.

Preparing for the Baking

In colonial times, recipes were called "receipts." More often than not, the author of the receipt would have assumed that the baker had already prepared to bake. This would have included:

Brick Ovens and Cooking On the Fire

According to Reference.com, managing the fire was likely the most important task for a colonial baker. Stoves didn't have attached ovens until the 1800s, which meant that bakers needed either to build a separate, brick oven just for baking, known as a beehive oven, or they baked their bread directly on the hearth or in the coals of the fire itself.

Even the brick ovens built for baking involved building the fire to the correct temperature, then settling the bread pans either right in the coals, or right in front of them. With each batch of bread that was finished, the fire needed to be rebuilt and retested to ensure that it was at the proper temperature before the next loaf could be put in. 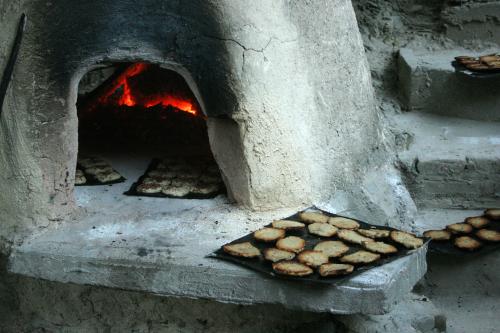 Baking advances came slowly. First, there was the Dutch oven that would at least offer radiant heat but only in the small space of the oven. Next came the roasting kitchen which used a reflector placed in front of the hearth and reflected heat back into the fireplace. This was the start of dry heat baking and the birth of baking as it is known today.

Although stoves with ovens may have seemed like a blessing for bakers and a chance to explore more options than just bread and the occasional cake, early ovens were still an ordeal because they were high maintenance devices that required daily cleaning and polishing. Learning how to artfully manage the flues of the oven to control the temperature was literally a trial by fire. 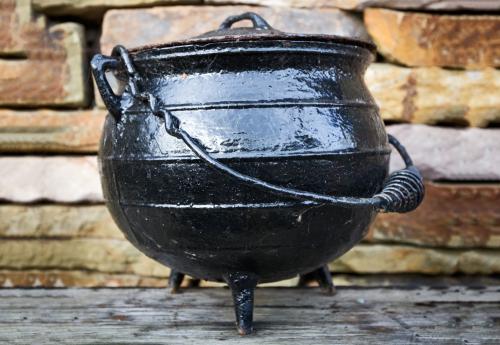 The types of baked goods typically baked at home or in commercial bakeries varied by region, as well as by time of year and what was available. In addition to the standard loaf of white bread, the following baked goods were produced fairly regularly:

Small baked goods, not called "cookeys" until the late 1700s, were not common. In colonial times, there were no chemical leavenings, so the cookies made back then must have been thin, hard, and dense.

With only air and egg whites to use as leaveners, macaroons were popular and more than likely the only baked good made back then that could be recognized today as a cookie. Pastries and other desserts were normally reserved for special occasions or purchased from commercial bakeries.

Flavorings in colonial baking tasted similar as they do today. Common colonial flavorings were:

Colonial bakers used nearly any spice they could get their hands on. But, according to The All-American Cookie Book by Nancy Baggett, the most popular flavoring today, vanilla, didn't arrive on the scene until the mid 19th century.

In very early America, biscuits and hardtack were made without leaveners, per Biscuits, Hard Tack, and Crackers in Early America, by Stuart Wier. Later, according to Colonialbaker.net, left-out grain combined with water known as levain, created an effective sourdough leavening for colonial bakers. Leaven, which is unused dough, was also used.

Barm from the foamy top of beer, also known as ale yeast, was a live yeast that could be stored for future bread-making. The yeasts worked well for breads although they must be proofed each time - often overnight - which increased the time spent on baking.

Pearlash was discovered in the mid to late 1700s, which lead to the creation of quick breads. Until that time, however, it was difficult to create smaller baked goods.

It's interesting to compare recipes from the 1700s and 1800s and recipes made today. Notice how terminology changed, and how the instructions for checking the oven's temperature are different from modern recipes. Bakers at the time did not have modern measuring cups and spoons, so all recipes had to be able to withstand variations in measurement.

Cornbread in the 1800s was a dense bread that lasted for a long time without spoiling. The baker could make a loaf from this dough, or form it into patties and fry it to make johnnycake, or "journey cake" that kept well on long trips. A bowl, spoon, pan, and cast iron skillet are needed.

Coconut was not readily available in colonial times, but when it was every part was used. The meat was removed and finely chopped, and the coconut milk was consumed or used in baking and cooking. These macaroons are not as sweet as the modern version, and remember that white sugar was very precious and usually used only for company or celebrations such as a wedding. You'll need an awl and a mallet to create a technique similar to what colonial bakers would have used, along with your spoon, fork, bowl, and cast iron skillet or pie plate.

Items like cornbread and macaroons got their start in regular diets during colonial times, but what they were baked in was not like their modern day equivalents. There was little to no ingredient control so flavors could change dramatically from one baking to the next. These recipes, while reminiscent of those made during colonial times, probably taste very different than what was consumed back then. 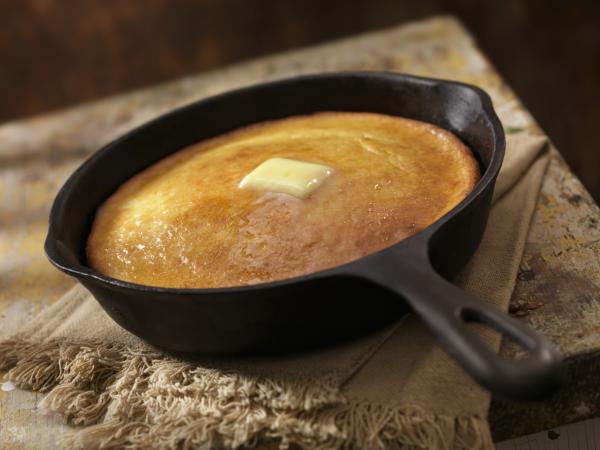 This recipe uses a skillet for baking, which may be what was used during the colonial baking process. 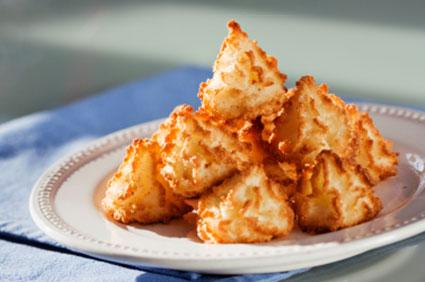 This recipe uses egg whites as a leavener, leaving it in keeping with colonial baking techniques.

Baking during the early days of this country was a difficult and complicated task. But these early attempts helped develop the baking conveniences and appliances used today. Recipes enjoyed in colonial times are still treasured today. Appreciate how far baking has come by learning the roots of the baking process you use every day and likely take for granted.