Are you interested in cooking and want to know how to use a rotisserie oven? Modern rotisserie ovens are similar to traditional ovens, only they have a mechanism to rotate the food while it cooks.

Though a modern oven with a mechanical motor may seem like a new idea, rotisserie style cooking dates as far back as the middle ages. In fact, rotisserie cooking has been the preferred method for cooking a wide variety of meats for many centuries in many different culinary cultures.

The disadvantage in the past was manually turning the meat; however, with the advent of modern technology today it is possible to buy a rotisserie oven that just requires the push of a button to perfectly cook a meal. Yet, there is some important information to learn in order to know how to use a rotisserie oven.

In traditional rotisserie cooking the food was meat. It would be skewered on a long rod known as a spit and rotated over a fire in an oven or outside. This method would be used to cook entire animals whole such as pigs, goats, and even entire cows.

This method was time and labor intensive as the heavy animals would cook for a long time requiring constant rotation from the cooks. The product was well worth the effort; however, as rotisserie cooking allowed the meat to cook evenly while it self-basted in its own juices which resulted in a delicious final product.

In medieval kitchens a servant would have to rotate the meat and was often referred to as the "spit boy" or the "spit jack." Spits rotated by dog-powered treadmills and steam engines were later created. The word rotisserie derives from French and first appeared in Parisian shops in 1450. 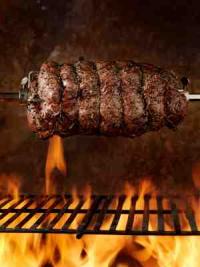 There are many traditional forms of rotisserie food in culinary cultures all around the world. The method was very popular in Western Europe in the medieval era. During holidays spit roasting an entire animal was a convenient way to feed a large crowd and still create a celebratory product.

The rotisserie cooking became a festivity in itself on the days of celebration. In the Philippines and other parts of Eastern Asia spit roasted pig known as Lechon is labored over by entire families. The meat is constantly basted to ensure that the outer skin of the pig is very crispy. Rotisserie style cooking in the Mediterranean and the Middle East is also very popular. Doner Kebabs, Gyros, and Shawarmas use various meats layered onto a spit and roasted. There are a variety of other methods in South America, Australia, and Africa.

Modern Times: How to Use a Rotisserie Oven

Traditional methods took a long time to master but learning how to use a rotisserie oven is easier. Modern rotisserie kitchen small appliances have motors to reduce labor down to properly skewering the meat and making sure it cooks for the proper amount of time. In addition, food cooked in a rotisserie oven is healthier than in a traditional oven as the fat drips out of the meat while rotating leading to dishes lower in cholesterol and fat, but without losing flavor or tenderness.

Traditionally, rotisserie cooking is reserved for meat, but anything from vegetables to fish can be cooked rotisserie style. To prepare a traditional meat dish marinate the meat or cover it in spices. When skewering the meat, ensure that the meat is properly balanced on the skewer so that it does not stress the motor. This is only an issue for horizontal rotisseries as some meats such as chicken are heavier at the neck then at the legs.

It is also important to cook for the proper amount of time; most rotisserie ovens require 15 minutes of cooking time per pound of meat. Finally, it is important to ensure that care is taken to avoid touching any glass or metal without oven mitts as the ovens get very hot. These steps will allow for cooking delicious food in a rotisserie oven.

Comments
© 2006-2021 LoveToKnow, Corp., except where otherwise noted. All Rights Reserved.
How to Use a Rotisserie Oven