Steak can elevate a meal to an occasion, and cooking a New York strip steak perfectly is one way to ensure a delicious meal. It is a tender and flavorful steak cut, and will make any meal magnificent.

Before you cook your New York strip steak, you have to buy it, and not all steaks are created equal. The United States Department of Agriculture (USDA) has a rating system that will help you choose the best New York Strip for your menu and budget. Retail consumers are typically offered three grades of meat: prime, choice, and select. Your best bet is to choose steaks graded in the top two categories, prime or choice.

When you're choosing a steak for your table, look for meat with a bright red color and good marbling. Marbling is the distribution of small flecks of fat through the meat, and although that sounds bad, it's a very good thing. Even marbling increases a steak's flavor, tenderness, and juiciness. 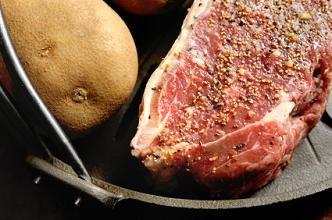 There are many flavorful methods for preparing a New York strip steak, but its naturally tender texture and sweet flavor doesn't need tenderizing or much additional embellishment.

Don't cut the fat off your steak before you cook it. It will add additional flavor and moisture to the meat during cooking. Instead, remove the fat after the steak has been cooked.

Ultimately, how you cook a New York strip steak is a matter of personal taste. The three most popular ways are grilling, broiling, and pan frying. All three methods will produce a juicy and delicious steak. Regardless of the method or steak recipe you use, the trick to making a good steak is to cook it evenly while keeping the juices inside.

Avoid piercing your steak. You don't want to give the juices a way to escape. Think of the juice as precious; it's part of what makes this such a superior cut of meat. Use your meat thermometer sparingly, and always stick it into the side of the meat, not the top. If possible, learn to gauge the doneness of meat with the finger test and avoid poking any holes in your steak.

If you plan on grilling your steak, make sure that the grilling surface is clean and well-oiled to avoid sticking. Fire up the grill until there is enough heat just above the cooking surface that your hand feels very uncomfortable after about three to four seconds of exposure. If you're using charcoal, the coals should be mostly gray and evenly distributed under the cooking area.

To grill the steaks:

Broil your steak when you don't have access to your grill.

Pan frying a steak is best done using a two part process. First sear the meat in the skillet, and then finish the process in the oven:

Do not to disturb it too much during the cooking process; you want to create a good seal to allow the outside of the meat to sear evenly.

The USDA recommends that steak be cooked to at least 145°F; beyond that is a matter of taste. A guest who likes his meat well done will be disappointed or worse if he sees too much red, so learn how to finger test your steak for doneness or use a meat thermometer. A good rule for doneness is:

Allow the juices in your steak to redistribute by letting it sit covered for five minutes, then plate and serve.

While strip steak is tender and flavorful on its own, it also combines well with other ingredients to form complete meals. Try these recipes that use New York strip steak as the base for meals.

This staple of Chinese food restaurants is easy to make at home using strip steak and a work.

Planking is a technique for grilling that lends a smoky flavor to the food by cooking the food inside the grill on top of cedar planks.

New York strip steak has a wonderful flavor and texture to rival anyone's idea of a good steak. The next time you're in the mood for beef, consider cooking some strip steaks; you'll be glad you did.

Comments
© 2006-2021 LoveToKnow, Corp., except where otherwise noted. All Rights Reserved.
How to Cook a New York Strip Steak