Sometimes known as London broil, a good sized boneless top sirloin steak is large enough to feed a family. The downside is that if it is improperly prepared, it can be a very tough cut of meat. Fortunately, cooking sirloin steak properly yields a flavorful meal with meat that is well tenderized.

Seasoning your boneless top sirloin adds flavor to your meat. You can do this with either rubbed seasonings or a marinade. Contrary to popular belief, marinades don't penetrate into the meat any more deeply than dry rubs do. Both add flavor to the surface. For best results, rest the meat in the marinade or with the dry rub for about four hours.

You can use a commercially prepared marinade or make your own. If you prefer to make your own, include the following components.

Alternatively, you can season your meat with a dry rub. You can purchase rubs for meats in the spice aisle of your grocery store or mix up a simple dry rub that adds tremendous flavor.

If you've marinated the meat, it will be quite moist. In order to prepare it for cooking, you need to blot away any excess marinade with a paper towel. After blotting (which is unnecessary if you've used a dry rub), allow the meat to sit at room temperature for 30 minutes to come up slightly in temperature. This prepares the meat's surface for cooking.

A delicious steak is crisp on the outside and moist on the inside, so you need to select the proper cooking method to maximize tenderness and flavor.

One of the best methods for cooking this type of steak is on the grill. In order to develop flavor, you will need to use an extremely hot grill to sear the meat, followed by grilling at a moderate temperature to cook the meat. 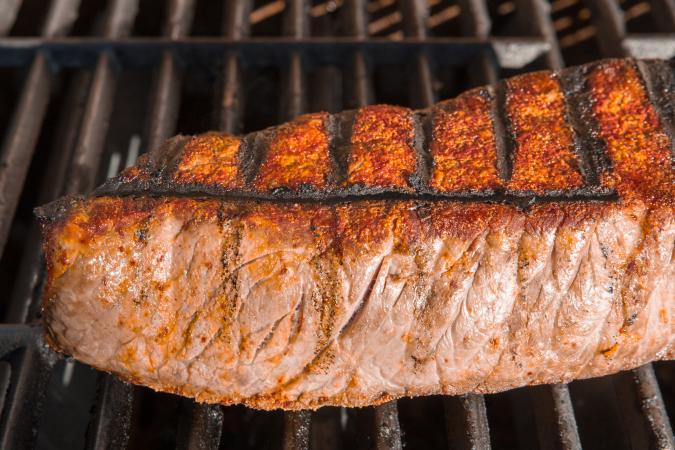 Charcoal adds a smoky flavor to the meat you won't get from a gas grill. To use a charcoal grill:

You can pan-fry the steak from start to finish if it is one inch thick or less, or pan fry to start and finish in a 350 degrees Fahrenheit oven if it is thicker than an inch. Choose an oven-proof, thick bottomed skillet, such as a cast iron skillet.

To broil your steak, heat your oven's broiler on high with a broiling pan in the oven preheating. Set the oven rack to the middle position.

You can also roast your steak in a preheated oven. Adding a little liquid to the pan allows the meat to retain its moisture and tenderness. To roast:

A slow cooker is a hands-off way to cook your steak.

The following chart offers approximate cooking times on a grill or in a medium-high pan to get the steak to its desired doneness.

If you cut the steak too soon, the juices will drain out. Therefore, once the steak has cooked, allow it to rest tented with foil on a cutting board for about 10 minutes.

For maximum tenderness, slice the steak very thinly against the grain. Doing so shortens the steak fibers, making it less chewy.

There are as many ways to cook a boneless sirloin steak as there are to flavor it. Add some of your favorite ingredients and the cooking method of choice to make your steak delicious and memorable.