Rice is inexpensive, low in fat and calories, and rich in a variety of vitamins and minerals -- so it should come as no surprise that it is a staple food for people all over the world. Before choosing a type of rice for your next meal, learn more about the different varieties that are currently available on the market.

Rice is part of a grain that consists of several parts: the shell or husk, the bran layer, and the embryo. The husk encloses the rice, the bran is the nutritious part, and the embryo is the starch in the center.

Different varieties of rice have different starch mixtures, which alters the texture of the grain once it is cooked. Rice is treated in different ways as it is harvested; brown rice keeps the bran layer, while it is washed off white rice.

Rice also comes in a range of sizes, usually referred to as long-grain, medium-grain and short or round-grain. These types might also be referred to based on the region where they were originally grown: Indica (long-grain, which came from India), Javanica (medium, grown only in Indonesia), and Japonica (short grain, from Japan).

Long-grain rice is the most common rice both grown and eaten in the United States. When cooked, the grains stay separate from each other, giving them a fluffy texture. It's a good basic rice to use in all sorts of dishes, from gumbo to stir-fry.

Common white rice is long-grain. You might also see white rice called fully-milled or polished rice because all of the outer layers are removed, leaving a shiny white surface behind. Most long-grain white rice separates easily once cooked. A few varieties of white rice include:

Brown rice is the same as white rice, except the bran layer is retained, giving the rice its brown color, nutty flavor, and improved nutritional profile. Brown rice is higher in fiber and B vitamins than white rice. Sources of brown rice include: 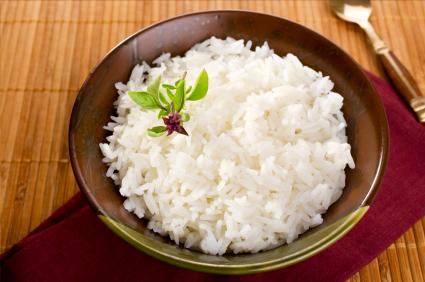 Jasmine rice, which is particularly popular in Thailand, is another kind of long-grain rice. This delicious rice has a great nutty flavor and is also known as "fragrant rice" in Thailand. It's wonderful with curries. Jasmine rice is stickier than other long-grained rice and will clump together at least slightly once it has been cooked. A few places to purchase Jasmine rice from include:

Basmati rice is a long-grained rice with a strong aroma and flavor. Though basmati rice was once grown only in India, it is now also cultivated in some parts of the United States -- including California and Texas.

This honey-red colored rice was developed from a type of basmati seed. As with other types of basmati rice, it features an aromatic nutty flavor.

Himalayan red rice is imported from India. As suggested by the name, it features a red kernel and has a strong nutty flavor that can greatly enhance an recipe. 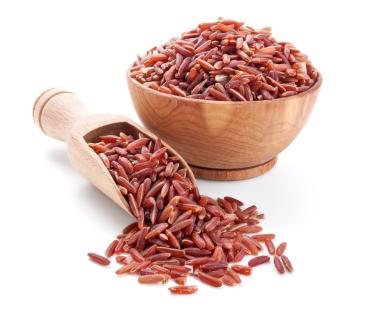 Short-grain rice is also known as sticky or glutinous rice because the little grains cook up and stick together very easily. This is the rice to use for sushi, and is the main type of rice eaten daily in traditional Japanese and Korean households.

As one might guess, short grain brown rice is short, plump and nearly round. When cooked, the Whole Grains Council notes that this type of rice tends to stick together quite well, making it an excellent choice for sushi-making.

Other Types of Rice

There are several other specialty varieties of rice to consider as well. 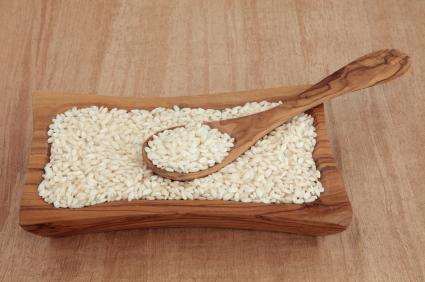 Arborio is an Italian rice used primarily to make risotto. It has a very short grain and high starch content so it cooks up creamy and smooth. Sources of Arborio rice include:

Carnaroli is another Italian rice frequently used to make risotto. It isn't as common as Arborio, but also cooks down well to form a creamy base. Carnaroli is a brown rice, which has a greater nutritional content than Arborio. Find Carnaroli rice at:

Vialone Nano is the shortest, roundest Italian rice and is therefore considered to be the best rice for making risotto. It absorbs liquids very well, cooking down evenly and smoothly. It also releases a higher starch content, so it is less likely to be sticky and more likely to flow onto the plate. It is less common than the other forms of risotto rice, but can be found at:

Bhutanese Red Rice is a whole-grain rice with a nutty flavor and soft texture. It cooks relatively quickly for a whole grain and retains its rust-red color even through the cooking process. It is a staple food in Bhutan where it is eaten with mushrooms and chili peppers. Find it at:

Though originally developed in Maryland, Colusari red rice is now grown in the Sacramento Valley in California. When cooked, it turns a lovely burgundy color that can jazz up any dish.

In addition to its pink color, Madagascar pink rice is favored for its sweet flavor. This type of rice also features hints of cinnamon, nutmeg, and cloves.

As one might guess, volcano rice is grown in volcanic soils - which are rich in magnesium, manganese, and zinc. Its unique flavor and high nutritional content makes it a vital component of any meal.

What About Wild Rice?

Despite its name, wild rice is not actually a type of rice -- instead, it is a type of grass seed. According to Eden Foods, wild rice was a staple in the diets of Native American tribes living in the upper Midwest, and today, laws require that it be harvested in the traditional manner.

Before choosing a type of rice for your next meal, evaluating it's nutritional content is important.

In general, rice is a poor source of protein. Individuals who are looking for additional grams of this nutrient in unique places, however, can sneak in a few extra grams by making smart choices when it comes to the types of rice that they include in their diet. In Nutrition Therapy and Pathophysiology (page 404), Marcia Nelms, Kathryn Sucher, and Sara Long note that rice which features its outer bran -- like brown, black, red, or pink rice -- contains up to 40 percent more protein than more highly-processed white rices.

As one might guess, rice that still contains it's outer bran takes substantially longer to cook than rice which has been stripped of this barrier. White rice can be cooked in as few as 16 to 18 minutes, reports Martha Stewart, while brown rice and other types of rice which still contain their outer bran may take as long as 50 minutes to perfect.

Whatever kind of rice you are buying, make sure that the bag is well sealed before you buy and that the rice smells good, not rancid, when you get it home.

White rice keeps almost indefinitely in a well-sealed container. Because of the bran, brown rice can turn rancid more quickly. Leave it in your pantry for about six months, or refrigerate or freeze uncooked rice to keep it longer. Don't be afraid to buy a lot and experiment.

Explore the World of Rice

With so many types of rice available today, deciding on a favorite may prove quite challenging! Try any of these varieties of rice and experience a world of flavor.