Fruit puddings stem from a Victorian tradition. These desserts were steamed or boiled and filled with raisins, other dried fruits, spices, and liquor. Many puddings today are made using instant packages, so a homemade fruit pudding is a delicious creation that is sure to make dessert special.

One of the most popular fruit pudding in the United States is banana pudding--a down-home, rich concoction made with slices of ripe bananas and vanilla wafers, layered between mounds of custard and kissed with a hint of vanilla extract. Other fruit pudding recipes tend to run toward the instant variety, dolled up with fresh or canned fruits, or versions of bread puddings with fruit. 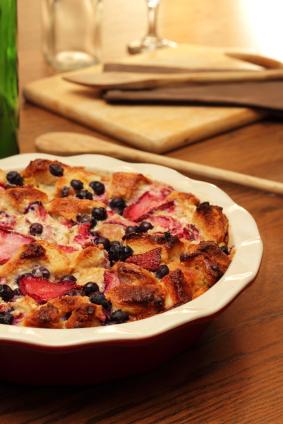 Plum pudding, or Christmas pudding, actually doesn't contain any plums. Historians point out that years ago, the words "plum" and "raisin" were interchangeable. This traditional dessert also contained suet (fat) for a delicate balance of flavor and texture, along with the raisins and a healthy dose of brandy. Plum pudding was a long labor of love, as it took five to eight hours to boil or steam it in tin molds or boiling bags. A perfect accouterment to the puddings would be ice cream, a hard sauce, or a flaming presentation of ignited brandy or rum.

Modern cooks have fine-tuned traditional recipes and come up with additional cooking methods. There are four different cooking techniques for fruit pudding:

Today's fruit pudding recipes yield soft, thick desserts, including flans and custards. Some recipes that have the name "fruit pudding" bear a striking resemblance to cakes that are combinations of fruit and batter, surrounded by a water bath, and baked until the batter is set. Others only have fruit flavorings or extract laced into a batter that is baked until it achieves a pudding-like consistency. The closest recipes to the old-school variety use prepared sponge cake, angel food cake, or stale bread as a base or layering ingredient to encase fresh or stewed fruits. Whipped cream or sauces are served on the side, yielding sweet tales and sweet traditions to satisfy your sweet tooth!