Whether you say phyllo, fillo or filo, it all roughly translates to "leaf" and is the thin sheets of dough that are the basis of baklava, a sweet pastry traditionally filled with chopped walnuts and soaked in sugar syrup or honey. The Greeks and the Turks claim this dessert as their own invention, but you also will find it in the Balkans, Middle East and North Africa. If you're ambitious, try a homemade phyllo and baklava recipe. For fun, make these untraditional but delicious versions - chocolate and bacon. Yes, bacon!

Make the Filling and Assemble the Baklava 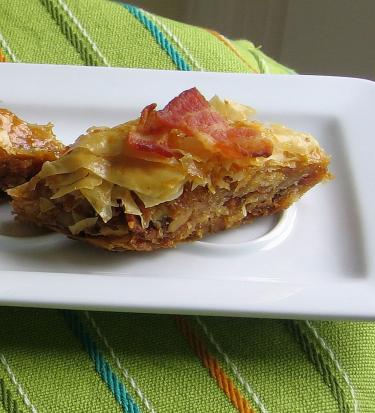 Desserts featuring bacon have been trendy for some years now. This recipe features bacon, walnuts, and maple syrup. Who doesn't love bacon? This version can be made in a 13x9-inch pan by scrunching up the thin phyllo and patting it down before coating with the clarified butter.

Make the Filling and Assemble the Baklava

Make the Syrup and Garnish

Baklava Is a Versatile Dessert

Phyllo dough is the perfect vehicle for many sweet and savory foods, including tarts, turnovers, and strudels. If baklava is on your radar, try experimenting with different nuts like hazelnuts, macadamias, pistachios, and almonds. A really neat way to put a new spin on this dish is by varying the sugar syrup by adding or substituting ingredients like rose water or cardamom or lime juice, for instance. Let your creativity be your guide, you're driving!