An electric knife consists of a motor and a set of blades. The blades cut and slice through a variety of foods -- including turkey, ham, bread, and vegetables -- without needing to stop or apply more pressure. Since it is motorized, the knife does all the work and all you need to do is guide it. Cordless electric knives make carving a breeze, so don't bother with a cumbersome cord when you have cordless options.

Depending on your budget and cooking needs, there are a number of options available when choosing a high-quality cordless electric knife. As with many kitchen tools, you get what you pay for when it comes to a cordless electric knife. If you plan on using the knife often, invest in a quality model so that you can expect it to last long and work well. 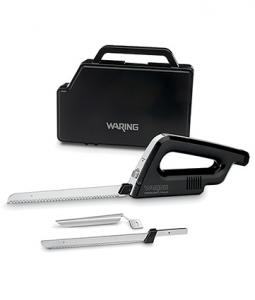 John Gallagher, executive chef at The Agave Bull in Hudson, Wisconsin, identifies the Waring Cordless Electric Carving Knife as a top-notch product. "The Waring knife is easy to use and makes a clean cut when slicing both meat and bread," notes Gallagher.

Sold for around $170 at Williams-Sonoma, the Waring Cordless Electric Carving Knife features two blades, a rechargeable battery, and an ergonomic handle that makes cutting through even the toughest foods a breeze.

In addition to the features described above, the Waring Cordless Electric Carving Knife has an adjustable slicing guide, which makes it easy to produce uniform cuts that are aesthetically pleasing.

According to reviews on the Williams-Sonoma website, the Waring Cordless Electric Carving Knife charges quickly and cuts various meats -- including turkey and ham -- with ease. The reviews also mentioned that the Waring model was easy to use, clean, store, and featured satisfactory size, storage capacity, and sharpness. 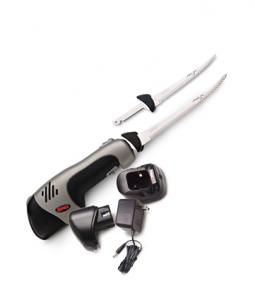 According to the article "The Cutting Edge," published in the November/December 2014 issue of Cook's Illustrated, the Rapala Deluxe Cordless Fillet Knife -- which can be purchased at higher-end retailers or through Rapala.com for just under $120 -- is a top choice when it comes to cordless electric knives.

In addition, the Rapala Deluxe Cordless Fillet Knife features a carrying case that keeps the knife and blades protected during transportation and storage. 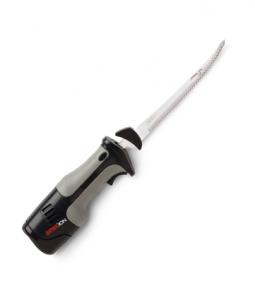 Cooks who appreciate the Rapala brand -- but can't afford to dish out the cash for this model -- may fare well with the less expensive Rapala Lithium Ion Cordless Fillet Knife, which is sold for around $90 at Rapala.com.

Cook's Illustrated notes that as with the deluxe model, this Rapala knife has a sharp blade that can cut through a variety of foods -- including meat, bread, and vegetables. As opposed to the higher-end model, however, you will only get one blade with this product.

The strong motor on the Rapala Lithium Ion Cordless Fillet Knife allows for 80 minutes of use and takes two hours to charge fully.

The Rapala Lithium Ion Cordless Fillet Knife has over 100 reviews on Amazon and the majority are quite positive. Reviewers noted the powerful motor and surprisingly light weight of the product, along with its relative comfort during use. 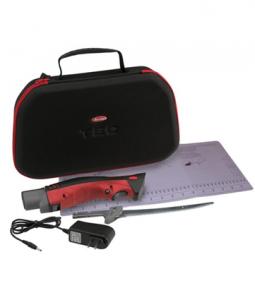 The knife has two 7 1/2-inch, chrome-plated stainless steel blades. The Berkley TEC TurboGlide LI Fillet Knife System is lightweight, powerful, and features a foldable cutting board and carrying case that makes it useful when on the go.

Reviewers on FishUSA.com were especially pleased with the long battery life and durability of the Berkley TEC TurboGlide LI Fillet Knife System. One reviewer noted that the product had been used for over three years, and the motor and blade still looked brand-new.

If you plan on purchasing a cordless knife, some features to look for to get the best one for your kitchen are:

Buy a Cordless Knife That Meets Your Needs

A cordless electric knife is perfect for those who don't want to be bothered with a cord or a manual knife. There are many models to choose from and in a range of prices sure to fit your particular need and budget.