When it comes to cooking, baking, and candy making, some ingredients are impossible to replace. However, light corn syrup can be swapped out with a number of substitute ingredients, and you'll still get impressive results.

How to Replace Light Corn Syrup

Made with real vanilla, Karo Syrup notes that the light variety generally features a light, sweet flavor. Though it can be easily substituted in many baked goods, finding an alternative to the ingredient when making candy may not be possible.

Little variation in final product will be noticeable when using granulated sugar as a substitute in baked goods, notes Marion Cunningham in The Fanny Farmer Cookbook (page 802). Candy recipes that call for light corn syrup may have a slightly grainier texture when granulated sugar is used instead, notes Cunningham.

Brown sugar is also a good choice for individuals who are looking for a substitute. To make this swap, GourmetSleuth encourages individuals to combine 1 1/4-cups packed light brown sugar and 1/3 cup of water. Boil this mixture until it becomes a light syrup, recommends GourmetSleuth, and use in place of one cup of light corn syrup.

As with granulated sugar, baked goods that are made with brown sugar instead of the syrup will generally fare well with regards to both flavor and texture. Cunningham notes that these baked goods may feature a "richer" flavor as brown sugar contains up to 10 percent molasses in her book (page 802). Brown sugar should not be used in place of the syrup when making candy, recommends Cunningham, as it contains a high moisture content that is difficult to counter. Candy that is made with brown sugar as a substitute may feature a grainy textur and is likely to become soggy after cooling.

As the dark variety features many of the same properties as its lighter counterpart, it also serves as an effective substitute. Substitute dark for light in a one-to-one ratio for optimal results when using this ingredient, recommends GourmetSleuth.

Their similar chemical make-up means that both baked goods and candy that is made with dark corn syrup instead of light will have a satisfactory flavor and texture. O Chef notes that since the dark variety contains small amounts of molasses and caramel flavorings, baked goods, and candy that relies on the use of this ingredient may have a more robust, or spicy, flavor.

According to GourmetSleuth, honey can be swapped in a one-to-one ratio. As this ingredient does tend to burn fairly easily, David Lebowitz cautions against its use in candy making. Baked goods, however, fare well when made with honey.

Depending on the type of honey used as a substitute, little to no differences in taste may be present. According to Best Honey Site, light-colored honey tends to have a sweet, delicate flavor and dark colored honey often features a strong, bold flavor. Therefore, light colored honey may not be discernible when used, but dark colored honey may stand out in baked goods. If using a dark honey, be sure to select one that will complement other ingredients used in the recipe.

Agave nectar should be added in half the amount of light corn syrup called for in a recipe. For optimal results, The Kitchn recommends adding up to one-third of a cup of liquid to the agave nectar before incorporating it into the recipe in question.

Agave nectar fares best when substituted in recipes that do not require a great deal of precision -- and therefore, is unlikely to provide satisfactory results when used in candy making. All About Agave notes that agave nectar can be used in place of corn syrup when baking although oven temperatures should be decreased by about 25 degrees to prevent early browning or burning. 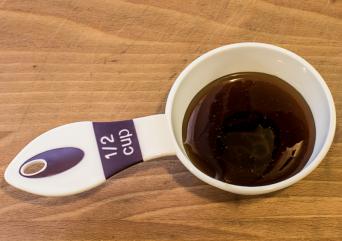 According to Karo Syrup, the dark version has a robust flavor that makes it a great choice for many baked goods. As with light, dark corn syrup can be swapped for other ingredients in baked goods -- though the results may not be ideal when used in candy recipes.

According to Karo Syrup, dark and light are interchangeable -- and thus, light can be used in place of its dark counterpart in baking and candy making recipes. Substitute in a one-to-one ratio for the best results in baking and cooking.

Karo Syrup notes that since the light has a more delicate flavor than the dark variety, baked goods or candy that is made with this substitute may be somewhat lacking in flavor. Texture and appearance, however is unlikely to be changed.

In The Fannie Farmer Cookbook, Cunningham identifies maple syrup as an effective substitute (page 802). Swap it for dark corn syrup in a one-to-one ratio, recommends Cunningham, to achieve optimal results.

Brown sugar is an excellent substitute for dark corn syrup in baked goods, as both items feature a rich flavor -- and therefore, the swap may be indistinguishable. Since brown sugar contains a high moisture content, it should not be used in candy recipes that call for the actual dark variety, as the final product may be grainy or become soggy after cooling.

When combined with light corn syrup, molasses can be used as a substitute for dark corn syrup. According to The Cook's Thesaurus, individuals who are interested in using this ingredient should combine it with the light syrup in a one-to-three ratio -- or one part molasses for every three parts light corn syrup. This mixture can then be substituted for the dark version in a one-to-one ratio.

When combined in the manner described above, molasses serves as an effective substitute in both baking and candy making recipes. Variations in textures and flavor are unlikely to occur, due to the addition of the light variety.

Although corn syrup is included in a number of baking and candy recipes, you don't have to ditch the urge to cook if you don't have this ingredient on hand. In fact, a number of common products can be used in place of dark and light corn syrup. With any luck, you won't even be able to tell that a substitution was made!