Hot chilies, also known as chiles, can add a dash of daring to cooking, but some are so pungent they can require the use of special gloves and masks to protect you. The world's hottest chilies are very fiery, and only the boldest are willing to take on the heat.

Chilies are rated for heat using the Scoville scale, which measures a pepper's pungency (which essentially means their spicy heat). Peppers are measured in Scoville Heat Units (SHU), which describes just how concentrated the capsaicin is in each pepper.

Capsaicin is the compound that gives peppers their heat. It is an alkaloid that binds to the tongue's pain receptors, which is why it provides a burning sensation. As a reference, pure capsaicin has 16 million SHU, police pepper spray has about 5 million SHU, and a jalapeño has between 2,500 and 8,000 SHU.

Where the Heat Hides

While many people believe that the heat resides only in the seeds of the peppers, this is a myth. The seeds do absorb some of the heat, but they don't produce capsaicin themselves. Instead, the capsaicin compounds are found in the peppers' placental membranes, which holds the seeds. To a lesser extent, the external tissue of the pepper has some capsaicin, as well.

The following list provides the top ten hottest peppers available as ranked by their SHU rating on the Scoville scale. According to Lauren Collins of the New Yorker, super hot chilies are evolving quickly as the quest for hotter and spicier peppers continues. Just a few years ago, the Red Savina Habanero was the hottest known chili pepper until the ghost pepper came along. Now, it has changed once again. 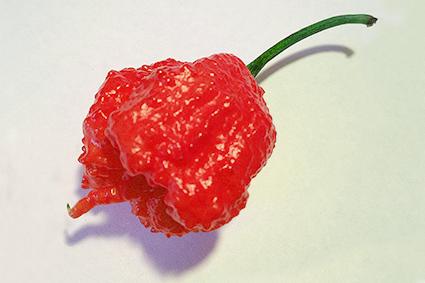 In 2012, the Guinness Book of World Records named the Carolina Reaper the world's hottest chili, with an average of 1.57 million SHU and a peak SHU of 2.2 million. The heat measured in this pepper supplanted the Chile Pepper Institute's hottest pepper, which is number two on this list.

This rounded chili with pebbled skin looks like a small, wrinkled red bell pepper, but there's quite a difference in heat (the red bell pepper has a SHU of 0). Crowned as the grand champion of hot chili peppers in February of 2012 by the Chile Pepper Institute, the Trinidad Morgua Scorpion has an average heat of 1.2 million SHU, but peppers vary up to 2 million SHU. The pepper plant is native to Trinidad and Tobago. Like other hot chilies, the pepper is used primarily in hot sauce, as well as to supply seeds to people seeking to grow the hottest chilies they can. 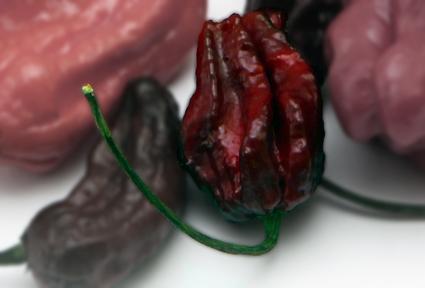 An oblong, milk chocolate colored pepper with a cratered surface (it resembles a dried fig), the chocolate 7 pot's benign sounding name belies the chili's average 1.17 million SHU (1.85 million max) rating. Native to Trinidad and Tobago, the chili is used in super spicy Caribbean cuisine, although a little goes a very long way. It is also used in hot sauce, and hot chili lovers everywhere purchase the seeds so they can grow their own fiery specimens.

With another of the top five coming from Trinidad, it's clear the Caribbean nation has a good climate for growing hot chilies. In 2011, the Guinness Book of World Records ranked this chili as the world's hottest, with a rating of 1.5 million SHU. Cooking with this pepper, and its hotter brethren, is dangerous business, requiring the use of protective masks and clothing! Because of its heat, the pepper is primarily used for hot sauce and seeds.

This red-orange pepper is about the size of a golf ball, but has a shape similar to a lantern with a wider rounded top and pointed end. 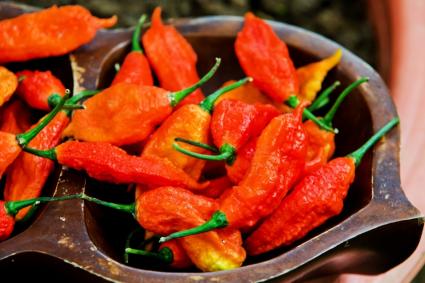 Also known as the Bhut jolokia chili, the orange oblong ghost pepper has a Scoville scale rating of 1 million SHU. This Indian pepper goes by a number of different names, including Naga Jolokia, red naga chili, and Bih Jolokia, among others. It held the World Record for heat in 2007.

The pepper is used in Indian curries and chutneys, as well as in pepper eating competitions. You can also find the peppers as a key ingredient in hot sauce.

Also from Trinidad, this pepper is named because of its color and the local legend that only one pepper is required to spice up seven pots of stew. The pepper ranges from an orange red to vibrant red in color with bumpy skin. It has a heat rating of around 780,000 to 1 million SHU. It is used in Caribbean cooking, as well as in hot sauce. 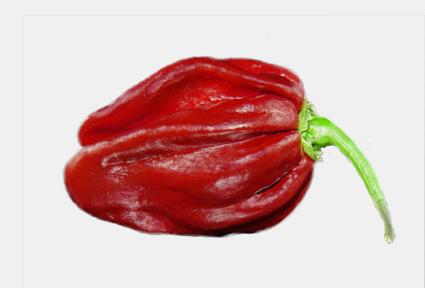 This nut brown pumpkin-shaped pepper is the hottest of the habanero peppers. Habaneros are native to Mexico and the Amazon, but can also be found in the Caribbean. The pepper, which has a Scoville rating of around 700,000 SHU, can be found in Yucatan cuisine, as well as in hot sauce.

It wasn't long ago that the Red Savina habanero was considered the world's hottest pepper. In 2007, it lost its Guinness World Record to the spicier Ghost Pepper. This chili is bright red and slightly rounded with a relatively smooth skin. Like the chocolate habanero, it is used in Yucatan and other Mexican cuisines, as well as hot sauce. The plants love heat and sunshine, and are native to the Amazon and Mexico, and can also be found in the Caribbean. The pepper's Scoville rating is about 500,000. 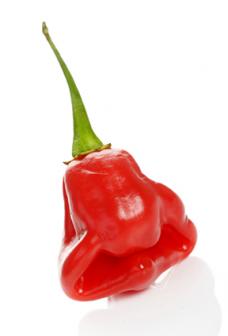 Jamaican cuisine owes its fiery flavors to the Scotch Bonnet pepper, which has a Scoville rating of around 350,000 SHU. The orange peppers resemble acorns and are native to Jamaica and the Caribbean Islands. While it may seem mild compared to some of the above peppers, it's important to remember that the Scotch bonnet is still about 40 times hotter than a jalapeño.

This shiny round orange chili has a Scoville rating of around 250,000. While it may be milder than other colors of habaneros, it's still a very spicy chili that is used in Mexican cuisine, as well as hot sauce. Like other habaneros, the orange habanero is native to Mexico, the Amazon, and the Caribbean, and can be found in the food of those regions, as well as in Tex-Mex and other North American cuisines.

Because the capsaicin interacts with pain receptors on your tongue, it can create a burning sensation that lasts for minutes, hours, or, in the case of the hottest peppers, days! Fortunately, there's help for the burn. According to Bon Appetite, a number of methods may help you chill out from spicy chili burn including drinking whole milk, eating yogurt, and eating white rice.