Many recipes call for yeast as an ingredient, but some people either can't or won't eat it because of allergies or health issues. Find out if you can substitute other ingredients for yeast, and more importantly, whether these substitutes will result in a pleasing bread or cake.

Should You Substitute Yeast in Recipes?

Yeast is a single-celled fungi used to give texture to breads, pastries, muffins, pancakes, waffles, and cakes.

When Not to Substitute

There is really no substitute for yeast in classic kneaded bread doughs. The structure of gluten protein in those products is very strong, and substitutes such as egg whites, baking powder, or baking soda are not powerful enough to stretch that protein network. Yeast performs another function in bread doughs; it "kneads" the dough at a microscopic level as it grows, improving the texture of the bread.

When You Can Substitute

There are some substitutes for yeast that you can use in recipes such as batter breads, pancakes, pizza dough, and cakes. The texture of the finished product will not be quite the same if yeast is not used. The crumb may be more coarse, or the product may not rise as high or be as fluffy or light. But the cake, or pizza crust, or cupcake will still be acceptable. 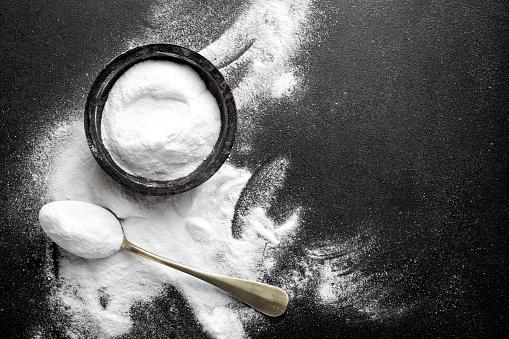 Baking soda (sodium bicarbonate) is an alkaline ingredient that produces carbon dioxide (CO2) when it is combined with an acidic ingredient such as lemon juice or buttermilk. The CO2 stretches the gluten and carbohydrate network in batters as the mixture bakes so it rises. Baking soda also increases the pH of a batter, which keeps the finished product tender.

Differences You May Notice

Baking powder can be used as a yeast substitute in recipes such as cakes, pizza dough, cupcakes, pancakes, muffins, and batter breads. Do not use baking powder in kneaded yeast breads.

Too much baking powder will make a food bitter so don't add too much. And if a recipe calls for a lot of an acidic ingredient, such as in a lemon bread or lemon cake, it's a good idea to add a pinch of baking soda in addition to the baking powder to help balance the pH of the product. These products made with baking powder will have a more open crumb and coarse texture than one made with yeast.

Beaten eggs or egg whites can be used as leavening in some recipes. This ingredient works best in cakes, pancakes, and batter breads and will not work in kneaded yeast breads. While the eggs or egg whites are beaten, the proteins denature. That means they unwind and form a network that traps air. In a batter that air expands in the oven and the bread or cake rises.

Beaten eggs and egg whites can be used instead of yeast as leavening in batter breads, cakes, cupcakes, muffins, and pancakes.

If a recipe calls for eggs or egg whites, use them as a substitute for yeast.

To use egg whites for leavening:

Baked goods made with egg whites as a leavener tend to be more fragile than goods made with other leaveners. The cake or bread may also be a bit drier with a finer texture, but there shouldn't be any change in taste.

Sourdough starter is made by combining yeast with flour and water. The mixture stands for days at room temperature. The yeast uses the flour as food. It grows and produces CO2 and acid over time, which gives sourdough products their characteristic sour flavor.

Use Grapes Instead of Yeast

You can make sourdough starter without commercial yeast by using grapes, which carry wild yeast on their skins, although this technique is not guaranteed.

You can then strain out the grapes and refrigerate the starter. It can be used in sourdough bread and pancake recipes. Use about half of the starter, then add more flour and water to replenish it. Store covered in the fridge.

Breads and other baked goods made with sourdough starter will have almost the same texture as those products made with plain yeast, but the texture will be finer. The flavor of sourdough goods will be more acidic than those made with regular yeast.

Tips on Working With Yeast Substitutes

Whenever you use baking powder, baking soda, or beaten eggs or egg whites as a substitute for yeast, get the dough or batter into the oven quickly. Cakes, cupcakes, and batter breads are delicate and the CO2 trapped in their structures can escape if they are left to stand too long. Bake them quickly for best results.

When you successfully update a yeast recipe using another leavening, be sure to write down the amounts you used and when you added the leavening to the recipe.

If a substitute doesn't work at first, don't give up. Look at the product. Is it not brown enough? Brush with milk or a sugar solution before baking next time. Is it too sour? Use baking powder instead of baking soda next time. Did it not rise enough? Increase the amount of leavener the next time you make it.

If you can't or won't eat baked goods made with yeast, you can substitute other leaveners as long as you aren't making a kneaded bread recipe. Armed with this knowledge, you can experiment with these leaveners to get the result you want. And remember that part of the fun of baking is experimenting and enjoying your successes.

0
Comments
© 2006-2020 LoveToKnow, Corp., except where otherwise noted. All Rights Reserved.
Resources, Advice & Tips for Covid-19
Read More
How to Substitute Yeast in Recipes