One of the cereal grains and part of the grass family, barley is a versatile and readily available grain that with a sweet, nutty taste that complements a number of dishes. Use it on its own or in conjunction with other foods to add this healthy grain to your diet.

Barley is prepared much like any other grain. You can cook it in a saucepan over the stove or even in a rice cooker. For a basic barley side dish or for cooked barley to add to another recipe, you will need to use one part barley to three parts liquid.

Place the 3 cups of water or stock in a saucepan on a stove. Add a cup of barley and cover the pot. You can also add some salt to taste at this step. Set the temperature to high. Once the water begins to boil, turn the heat down to low ensuring it leaves the liquid at a mild simmer. Barley should cook completely in about 45 minutes, but is done when all the liquid is absorbed. Simply fluff with a fork after cooking and serve.

How to Cook Hot Barley Cereal 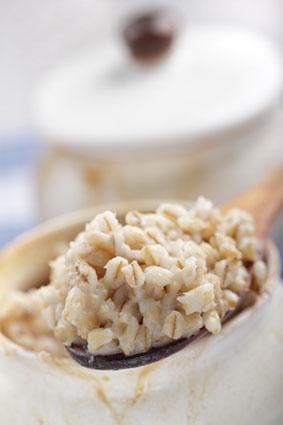 Pearled barley - the most commonly found variety - makes a wonderful change from oatmeal as a hot breakfast cereal. Prepare it on the stove top, or cook it overnight in the slow cooker for rich, hot breakfast.

How to Cook Barley and Vegetable Soup

Barley is most commonly used as a grain in soups, because it stands up well to continued cooking. Barley and vegetable soup is a classic, hearty dish to serve during the winter months. 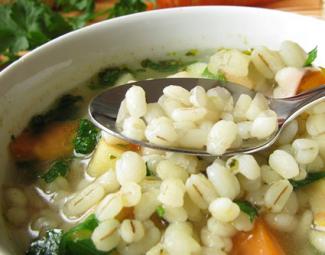 Barley can be found in two different forms: hulled and pearled. Pearled is the most common. The grains have had their hull removed, and have been polished to remove the bran layer as well. Pearled barley cooks almost twice as quickly as the hulled variety, which merely has its outer hull removed. Hulled barley is closer to the whole grain, and contains more fiber than the pearled variety.

If you choose to use hulled barley in your foods, at least 30 additional minutes to your cooking time, and plan on adding up to 60 minutes if necessary.

Both hulled and pearled barley will use approximately three cups of liquid for every one cup of grain. Adjust your recipes accordingly to include the necessary liquid.

Use barley in place of other grains, including:

Barley can also be combined with other grains, such as mixing different types of rice with barley in a pilaf. Remember that barley is thicker than most other grains and may absorb more liquid or require a longer cooking time as a result.

Barley adds a rich flavor to many different foods. Try it in place of other cereal grains for breakfast or dinner and experience its flavors.

Comments
© 2006-2021 LoveToKnow, Corp., except where otherwise noted. All Rights Reserved.
How to Cook Barley