Using alcohol in cooking can add flavor and depth to sweet and savory dishes. When not cooked long enough for some of the alcohol to evaporate, however, it may also add a harsh flavor. Different recipes call for various types of alcohol. Wine is a popular choice in savory cooking, although braises, sauces, and other savory dishes may use beer, fortified alcoholic beverages like Sherry, Marsala, and brandy, spirits, or even sweeter wines like port. Spirits and liqueurs are commonly used in sweet dishes and flambées, while wine is a popular beverage for poaching fruits.

Many people assume that heating alcohol for a few moments "burns it off." While cooking alcohol over high heat for a few moments does minimize the harshness of the alcohol so you only taste its mellower flavors in the food, it takes quite a length of sustained cooking for alcohol to completely burn off.

Ethyl alcohol, the kind found in alcoholic beverages, evaporates at about 173 degrees Fahrenheit. While it begins to evaporate at this temperature, however, it evaporates quite slowly.

In 2007, the USDA performed an analysis of alcohol and nutrients lost through cooking and determined the rate at which alcohol burns off during various cooking methods.

Adding Alcohol to Your Dishes

How and when you add the alcohol to recipes affects the flavor of your foods. Alcoholic beverages can leave a harsh flavor in foods if they are not added early enough in the process so that some of the alcohol cooks off. Consider the following tips for adding alcohol when you cook. 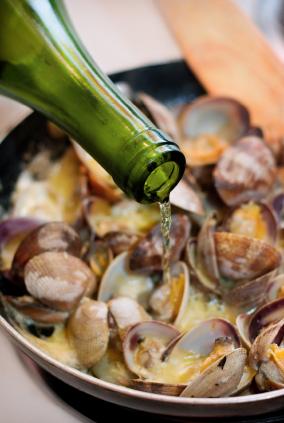 When creating a pan sauce, add alcohol to the hot pan after you've sautéed your aromatics and before you add other liquid ingredients, a process called deglazing. After you've added the alcohol, scrape any browned bits from the bottom of the pan with a wooden spoon or spatula so you can incorporate more flavor into the food. Add other liquid ingredients 30 seconds to a minute after adding the alcohol.

In braises, simmered sauces, and soups, it's best to add alcohol after you've sautéed meats and aromatics but before you add other liquid ingredients. This allows you to deglaze the pan and remove alcohol's harshest flavor components. Add remaining liquid ingredients after about 30 seconds.

In gravies, add alcohol after you've made the roux, which is stirring in flour and cooking it with the fat. Stir to completely incorporate and then add other liquid ingredients.

Baking is a very specific chemical process. Therefore, it is best to following baking recipes exactly, adding alcohol as outlined.

When you flambé, you must be very cautious. While the alcohol, which burns with a blue flame, should burn off after just a few seconds, it's best to take some basic safety precautions.

To flambé, complete the following steps.

In many cases, you can enjoy the flavors from certain alcohols in cooking without adding any alcohol. The following are all good substitutes for alcoholic beverages in recipes.

If you are watching your sugar intake, you may want to use a substitution. Alcohols that contain sugars will add sugar to the dish. While dry wines and spirits won't add any sugars to dishes, sweet wines and liqueurs will.

When cooking with alcohol, keep the following in mind.

Cooking with alcohol can add depth to foods and balance flavor profiles. By using proper alcohol cooking techniques, your foods will taste delicious.

3
Comments
© 2006-2021 LoveToKnow, Corp., except where otherwise noted. All Rights Reserved.
Cooking with Alcohol