Other popular pieces of cast iron baking equipment include:

Tips for Baking in a Cast Iron Pan

Make your baking session a success by following these tips.

This homey open-face pie (pictured above) is baked in the oven and is an exception to the rule of starting with a hot pan. The buttery pastry crust is fitted into a cold cast iron skillet. You can make the pastry in a food processor or by hand. Dried cranberries can be substituted for the dried cherries, making this recipe a fall and winter holiday dessert contender. You will need a 10-inch cast iron skillet. If your skillet is smaller, decrease the amount of pears and dried cherries or cranberries. 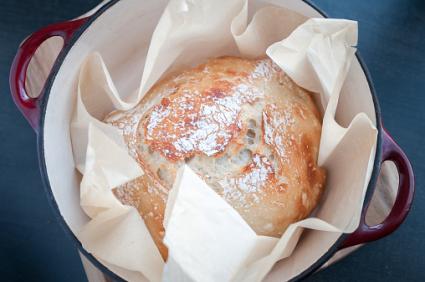 This bread tastes like it was made with a sourdough starter passed down from your French grandfather. But, no, it just needs four ingredients, a 5- to 6-quart cast iron or enameled cast iron Dutch oven with a lid knob able to withstand 450-degree heat, and a 12- to 18-hour rest on your kitchen counter (so plan accordingly).

This will make enough for 4 to 6 servings. 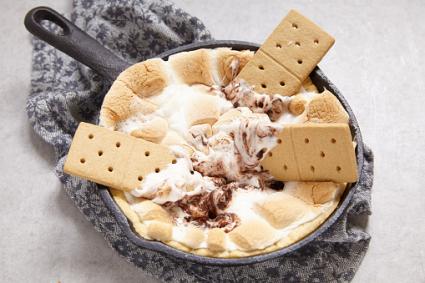 Take this fun campfire dessert/snack away from the bonfire and bring it into the kitchen by making it in an 8- or 9-inch cast iron skillet in the oven. It's an easy recipe with lots of possibilities for variations.

Take a basic s'mores dip recipe and make a few modifications so it's suitable for the cast iron skillet. Swap out chocolate frosting for 1 1 /2 cups milk chocolate chips and use a cast iron skillet placed on the center rack of an oven heated to 450 degrees F. Once the oven comes up to temperature, remove the skillet with a thick pot holder and place it on a heatproof surface. Proceed to melt the butter in the bottom of the skillet and layer chips and marshmallows. Bake until the marshmallows are golden brown (about 5 to 7 minutes) and remove from the oven.

Allow the dip to rest for 5 minutes before serving. Be careful because the mixture is very hot. Advise your guests to blow on their scoop before popping it in their mouths.

This recipe lends itself to so many variations, but then it wouldn't be a s'mores dip! But if you can't control your creative impulses, try using a combination of chocolate and peanut butter or praline chips. Chopped pecans or walnuts can be layered on top of the chips, and you can even consider spreading on a layer of Marshmallow Fluff instead of marshmallow pieces. It's pretty much anything goes.

What were once considered cooking tools for cowpokes, campers, and pioneers, cast iron ware has reemerged as a trendy and cool way to cook. Baking desserts and breads are just the tip of the iceberg. Cast iron is also ideal for deep frying, searing, and braising, and it can be used on the stovetop, in the oven, or on a grill.