Few things signal the beginning of morning as clearly as the smell of bacon wafting through the house. It used to be that bacon played sidekick to the standard eggs and pancake breakfast, but those days are long gone. Bacon is now marinated, rubbed, and featured in everything from salads to desserts. Follow these tips and tricks for to-die-for bacon every time.

While pan frying remains the typical preparation method, there are basically three different ways to prepare bacon and enjoy it: frying it in a pan, microwaving it, or baking it.

This is the way most people know how to cook bacon. It yields a less crispy bacon than microwaving or baking, and it must be watched constantly lest you burn the bacon to a crisp.

While there do exist a myriad of gadgets for cooking bacon in a microwave, all you really need is a flat dish that fits into the microwave, and paper towels. If you do happen to have a fancy bacon cooker for the microwave, the directions are still the same.

Believe it or not, most restaurants bake their bacon. This renders a very thin, flat piece of bacon that is cooked to crispy perfection. This method is also superior for creating bacon bits, since it yields the most consistently crunchy texture out of any of the methods you can use to cook bacon. 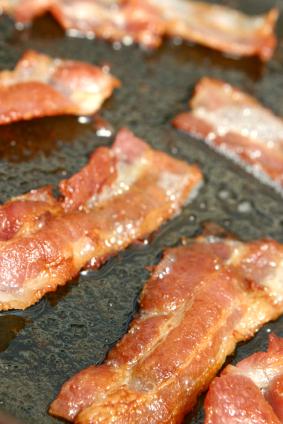 Bacon is hard to mess up. Even when it's a little too burned, it's still awfully tasty. With that said, if you follow these five tips, you'll have bacon perfection every time.

Bacon is surprisingly versatile and goes well beyond a simple side dish at breakfast. Recently, bacon has taken a spot in gourmet trends appearing in everything from desserts to condiments. Whether you want to try the simple or the bizarre, use your cooked bacon for something spectacular.

Once you've eaten marinated bacon, you may never want plain bacon again. To marinate, use about one-half cup of marinade per one pound of bacon. Rub your marinade over both sides of the bacon, making sure to rub marinade into fat. Let sit for about 20 minutes. Pan fry or bake the bacon as usual. Try any of these marinades for delightfully different bacon:

Get our your muffin pan and make bacon cups for serving salad. They are surprisingly easy to do, and the presentation can't be beat.

Salty and sweet is always a winning combination. To use a spice rub on your bacon, let your bacon sit out until the fat is soft. Rub the spiced mixture on both sides of the bacon and cook as usual. You can use this method whether you are pan frying, baking, or microwaving - although the flavors tend to stand out more if you pan fry. Try one of these combinations with one pound of bacon:

Currently, the cooking world is having a love affair with bacon. Bacon is being featured not only in the traditional ways, but also in things like desserts and even alcohol. If Oscar Mayer no longer satiates your need for the greasy goodness that is bacon, try a store like Bacon Freak, which sells artisan bacon and other bacon-related products.

0
Comments
© 2006-2020 LoveToKnow, Corp., except where otherwise noted. All Rights Reserved.
How to Cook Bacon