If you've never tasted bananas cooked in a sweet rum sauce and served warm with ice cream, you don't know what you've been missing. If you have, your mouth is probably watering at the prospect of having it again! Either way, these two recipes produce an incredibly delicious dessert you'll want to serve on special occasions.

This is a very traditional Bananas Foster recipe that includes igniting the rum to burn off the alcohol so only its flavor is left. As a result, you will need a lighter. This recipe yields about four servings, but you can stretch it by putting fewer slices in each dish. 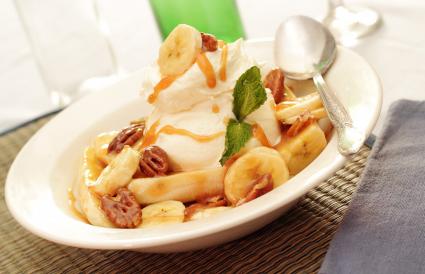 If you want to make this scrumptious dessert without setting it ablaze, this is the recipe for you. Just be aware that the finished dish will still have some alcohol content. This recipe yields approximately three servings.

Unlike many desserts, Bananas Foster is meant to be eaten right after it's made. This means you won't want to store it because it will lose some of its charm after refrigerating. If you find you must store it, put it in an airtight container in the fridge and eat it within two days. You can reheat it in the microwave until it's warm.

Everyone Should Try This Dessert Once

Bananas Foster isn't served as commonly as chocolate layer cake or pumpkin pie with whipped cream, so perhaps you've never had a chance to taste it. If that's the case, you have even more reason to try out one of these recipes and decide whether you've discovered a new favorite.